Market events – What happend in Iberia???

Were you one of the many that observed a significant drop in Spanish settlement prices on April 19th and then again on May 5th 2021? If so, I should imagine that you, like us, were intrigued to understand the reasons behind this startling change. It also raised the question, ‘is the Spanish market becoming more volatile than other European markets?’
To answer these questions we need to fully understand why this shift occurred so suddenly.

Lets start with an overview of PPAs. 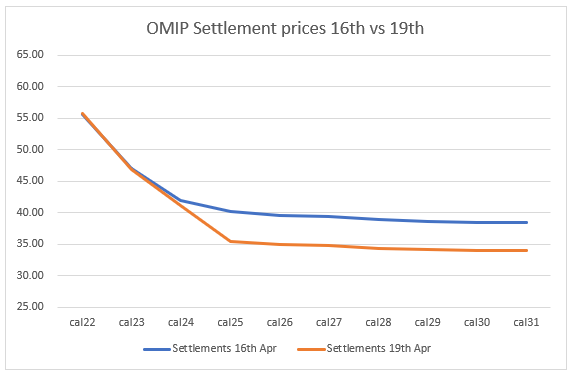 Subsidy schemes in Europe were designed to give power producers and developers financial stability by providing a guaranteed fixed income per unit of power produced. Today, these schemes are being phased out and companies are moving to privately negotiated long term energy deals with utilities and corporates – PPAs, to safeguard against market risks. A PPA is a contract between a seller and a buyer (offtaker) agreeing to sell/buy a specified volume of energy for a specific tenor (time period) typically of 10-15 years and for a specific price.

Power markets tend to be highly volatile, therefore by entering into a long term energy deal, the offtaker becomes exposed to energy risks for the full duration of the contract. To mitigate the related risk of financial losses, utilities adopt specific pricing and risk management methodologies. Risk management is done via so-called stack-and-roll hedging, which is performed by offsetting contracted volumes in the liquidly traded tenor range (typically the first 3 years). While this strategy negates a large chunk of price risk, some of it remains on the offtakers’ books, and fair values of energy are corrected by a discount to compensate for it.

In brief, under stack-and-roll hedging utilities warehouse risk and thereby avoid to transact on long tenors. While all market participants stick to this way of hedging, prices on the backend are never traded, with settlement levels typically being a mere extrapolation of traded prices.

What is stack and roll?

PPA transaction prices are generally never published. This causes a lack of pricing transparency, making it harder for renewable sellers to know how to price energy and whether quotes given by offtakers are in line with market pricing. It was for this reason, we created our price reference platform, PexaQuote. Besides showing PPA prices, PexaQuote also explicitly displays risk discounts.

The cause for this unprecedented pricing dip, lay with an offtaker adopting a different, more risk averse approach. Rather than holding onto their PPA and hedging out just the first 3-4 years, they decided instead to trade the full 10 years using a futures contract via the OMIP (Iberian Energy Market Operator – or Operador do Mercado Ibérico de Energia – Pólo Português, S.G.M.R., S.A.). By taking this approach they passed the risk entirely to a second offtaker and became a sleeving party between the project and the final offtaker.

The consequence of trading via an exchange, was that the PPA pricing became fully visible to the market. The PPA pricing included the ‘liquidity premium’ resulting in prices for the back end of the deal to dip. For anyone observing market prices without knowing the market context of what happened, this most likely caused alarm.

In contrast to the “stack-and-roll paradigm”, the use of OMIP futures as a hedging instrument rendered the risk discount observable, i.e visible to the market. Therefore, if the PexaQuote model is correct, the move of the backend of the price curve should directly relate to the otherwise non-visible risk discount.

As shown in our webinar series this was the case, you can see this numerically in our recorded webinar here. The average price move of the illiquid cal25-cal31 between settlement levels on 16th and 19th implied a liquidity premium of 3.20 EUR/MWh vs a level of 3.27 EUR/MWh, as predicted by our PPA Price Reference Platform, PexaQuote.

How to find PPA Prices and Get Quotes from Offtakers

Data gaps are harming returns from your renewable energy projects. Here’s how to fix them.