Virtual PPAs: the shift from hassle to bustle

The maturity of the PPA market comes with the normalisation of what was once considered a hurdle; that is, Virtual PPAs. Let’s re-introduce the contract structure with the key points to grasp before you start your PPA journey.

During the outset of Power Purchase Agreements (PPAs) as a tool for renewables financing in Europe, the preference for both sellers and buyers was Physical PPAs. Nonetheless, over the past months there has been an increasing momentum behind the Virtual PPA (VPPA) structure, gained by demand from US-based corporates. VPPAs are anything but new. But in Europe, it took a while for the concept to mature.

You may have noticed that when a European PPA announcement involves a Virtual PPA, the structure is often heavily emphasised. Well, it’s because up until recently, it has been relatively rare. But not anymore.

What’s the difference between physical and virtual structures? Why do virtual PPAs come up increasingly often in renewables discussions? What are the implications of either option for your strategy? Are there synergies with the impetus of Cross-border PPAs?

Whether you are a seller or a buyer, understanding Corporate VPPAs is vital, and this is where Pexapark reports for duty. Our clients review the option at an increased pace, and we decided to answer some of the more frequent questions we receive to demystify the term so that you can navigate it with confidence.

If you are new to PPAs, start with our What is a PPA guide to ensure you have the foundations covered.

How is a Virtual PPA different from a Physical PPA?

We get this question a lot! The beauty of the PPA market is that although it’s maturing, it is nowhere close to reaching its full potential, and new players – both on the sell and buy-side – explore the opportunity every day.

In a Physical PPA, the offtaker buys energy directly from a power plant. As the name indicates, there’s a form of physical transfer of the energy – although the electrons that will be consumed are not necessarily the electrons produced by the plant. In the majority of times, the seller and the buyer will be in the same grid network or electricity pool.

The generator and the buyer sign a sale agreement. A buyer like a corporate, because maybe it’s unable to buy the physical energy, has a sleeving agreement in place with a utility, where it ‘sells’ the energy it buys from the generator. The sleeving utility then sells back the energy to the corporate. Don’t let this confuse you: the ‘sale’ of energy from the corporate to the utility is simply contractual. In the US, for example, large corporates, such as Google, do have the capacity to register to participate in the wholesale markets, but smaller corporates may not.

In a Physical PPA, the buyer needs to have extra physical supply contracts in place, to ensure continued supply of energy.

A Virtual PPA, also called Financial PPA, is essentially a financial instrument. In the finance jargon, it’s also called Contract for Difference (CfD) or financial fixed-for-floating swap. The buyer and the seller agree on a strike price. The energy from the project is sold to the wholesale market and depending on the difference between the sold price and the strike price, there are cashflow exchanges between the two parties.

If it’s a virtual agreement, what happens to the corporate’s supply contracts?

The corporate maintains its supply agreements that do not interact with the PPA but are linked to spot markets.

In essence, both the offtaker and the seller buy and sell from the spot market. And depending on the fluctuation of the price, there are cashflow exchanges between the two parties. In the below examples, which are based on true historical spot prices and a randomly chosen PPA price, whenever the spot price goes above the strike price, the generator pays back the difference to the buyer. When the spot price is below the strike price, the buyer pays back the difference to the generator. Both have respectively sold and bought the energy at the same spot price, so the cash flow exchange results in both having secured a fixed price.

Before we continue: Visual examples of cashflow exchanges in a VPPA 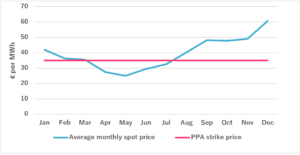 What are some benefits of VPPAs?

Increased pool for both buyers and sellers

The location of production is de-linked with the point of consumption which increases project optionality for when producers and buyers do not sit in the same grid network. Contrary to what is usually needed for Physical PPAs,  in a VPPA the offtaker and the seller do not need to be in the same grid network. This opens up possibilities for intra-country PPAs with different grid zones, and cross-border PPAs.

For the seller, it means that the pool of buyers extends significantly which could help them achieve financial close quicker. For the buyer, so is their pool of projects or sellers to choose from. This is one of the many reasons VPPAs have been very popular to the US; an offtaker in Texas may not have enough projects to choose from, so they wanted the ability to look for assets all over the country.

For both intra-country and Cross-border Virtual PPAs, a corporate can more easily aggregate volume from multiple locations. This is possible in Physical PPAs as well, but the interaction with multiple supply agreements would make the process significantly more complex and lengthy. In a VPPA, all the corporate needs to do is estimate their volume needs and how much of it wants to offset with clean electricity.

What are the main complexities of VPPAs?

If you know one thing about why VPPAs have not been particularly popular in Europe up until recently, it’s the International Financial Reporting Standards (IFRS) accounting treatment. And this is absolutely true for many sellers and corporates. In Europe, under IFRS, VPPAs are treated as a derivative – which is fairly different to the US case, where such a contract is not treated as a derivative. Nevertheless, even in the US the trend of VPPAs did originate from large corporates which had the ability to navigate the process, such as Google, Amazon, Facebook and the list goes on. And it’s them also transferring their knowledge to Europe through their subsidiaries. However, many non-Google-size companies found the IFRS regulations that come with VPPAs an obstacle. Having said that, the market is far ahead where it was a few years ago, so this is slowly changing.

In a VPPA, when consumption and generation sit in different pricing zones, a decision needs to be made as to where the price will settle –which is called basis risk. In a Cross-border PPA, for example, if a corporate has demand in Germany, but buys from Spain, which country’s spot prices will the PPA price settle against? The decision will define the exchange cashflow of the agreement, so it’s a big one. This will be a major negotiating point in the process, and both buyers and sellers will need more skills to understand wholesale market dynamics.

How are Cross-border PPAs relevant to the VPPA momentum?

Indeed, there is a direct correlation between VPPA options becoming more popular and corporates wanting to aggregate demand in multiple countries, or source renewables in locations that it may prove more competitive to do so. As sophistication in the market increases, the time for Cross-border PPAs  to shine is arriving too. A Physical Cross-border PPA is possible in paper, but it can be a time-consuming hustle. This is why the market is yet to see a confirmed Physical XB PPA. According to publicly available information, the majority of the Cross-border PPAs signed in Europe appear to be virtual ones.

The momentum is relevant to what we analysed before, about the benefits of aggregating demand and the simplicity of not having to interfere with the supply agreements of each location. Learn more about the concept by reading our Understanding the value of a Cross-border PPA: A guide for corporates guide.

Buyers can potentially access lower prices, and increase pool of eligible projects to offtake power from. For example, Germany appears to be a sellers’ market. There are many willing buyers, but not a lot of projects that meet their criteria.

For sellers, Cross-border PPAs offer a largest offtake pool beyond country limits. For example, a producer may have a project in a country with limited bankable counterparties. Or, it could that they have difficulties finding the sweet spot in PPA negotiations. Therefore, they can look at offtakers in a different country.

Is there a difference around Guarantees of Origin (GoOs) between a physical and a virtual PPA?

No. Either a Physical or a Virtual PPA can include GoOs in the agreement. This is a point of negotiation with the two parties, irrespective of the type of PPA.

What’s the difference between synthetic and virtual PPAs?

For us, there’s no difference. It’s simply terminology used in different countries – and terminology in PPAs can create great confusion. But we like to keep things simple.

Is there a difference in the cost of a VPPA and a Physical PPA?

No, the PPA price should be along the same lines. Balancing costs associated with physical PPAs are usually not included in the PPA price. These are usually separate agreements for both cases. The difference is that in a Physical PPA balancing fees often are negotiated with the sleeving utility, whereas in a VPPA the utility providing a buyer’s baseload power may even not be aware of the VPPA in place. Balancing agreements and costs are not part of the PPA price in neither case.

Pricing is linked to multiple dynamics and is literally a form of art. The fair PPA price and any pricing structures that the parties want to negotiate are irrelevant to whether it’s a Physical or a VPPA.

When there’s basis risk involved – which is often the case in VPPAs – pricing evaluations become more complex, though.

Is there a difference in volume structures or tenors?

No, there shouldn’t. Whether a seller can offer Pay-as-Produced (PAP) or Baseload (BL) and at what tenor is exclusively up to their business model and has nothing to do with whether it’s a Physical or Virtual PPA. The tenor is an important element to the additionality of the PPA – as in, how much the PPA enabled the financing of a new asset to be financed and come online. A buyer interested in additionality needs to be ready for a long-term tenor linked to a new project/s irrespective of the type of PPA.

What’s the best option: a Physical or a Virtual PPA?

The answer is dependent on your strategic priorities, risk appetite and capabilities. If you want to discuss further, we are happy to review your transaction needs and discuss different options for your business case.

Are your data gaps harming returns from your renewables projects?

Pexapark analyses AIP acquisition in the US